Skip to content
Did you know that anxiety can be caused or amplified by poor digestion?  This is a relatively common relationship that I have seen in clinic multiple times over the years.  Last year, a 28 year-old female came to the clinic for help with anxiety.  She had always been a “worrier” but noticed that the anxiety had turned into something more than just worrying.  After 2 panic attacks that occurred without a trigger or identifiable cause, she came looking for support.  Not wanting to take traditional anti-anxiety medications suggested by her MD, her friend had suggested coming to see a naturopath.


Reviewing her full health history which included excess gas and bloating that couldn’t be related to any particular food along with a skin rash and sugar cravings, I suggested that she do the stool microbiology test.  Yeast was discovered and treatment started along with dietary changes.  After an initial increase in anxiety for a few days, a very noticeable drop in symptoms occurred by the second week.  This continued to improve until she no longer felt anxious without reason.  What is the connection between yeast and anxiety?


The neuroendocrine system is a complex network of nervous tissue surrounding the intestines and is often referred to as our second brain.  70-90% of the hormone serotonin is produced and secreted here and is then transported to the brain via blood.  Serotonin, aka the “feel good” hormone has very important functions, such that many pharmaceutical drugs act to mimic or enhance serotonin levels (eg – prozac, citalopram, cipralex).  When serotonin levels are low, symptoms of depression, anxiety, insomnia, addictions and weight gain can be observed.  If digestive health is not optimum as in the example when there is yeast overgrowth, it is difficult to produce appropriate levels of serotonin leading to anxiety and other symptoms.  By treating the gut health and restoring balance, the neuroendocrine system is more efficient and able to increase serotonin levels thus alleviate symptoms.  It was the link for this patient having anxiety and yeast-overgrowth/candida.  Here is an example of the  Doctor’s Data Microbiology Stool Test that was used.
​ 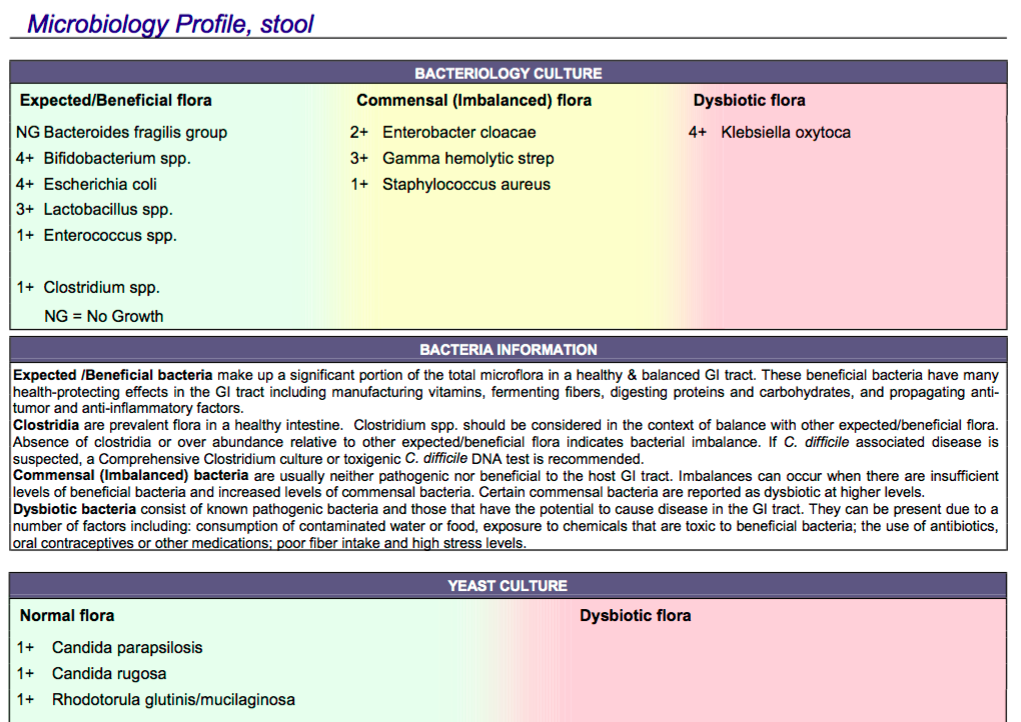