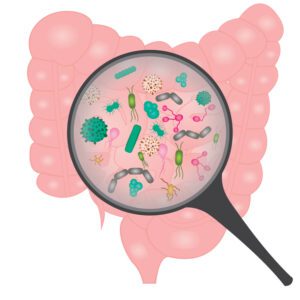 Digestive conditions often overlap, but the treatment can be very specific. It is important to understand the differences, how to test for and diagnose irritable bowel disease (IBS) and small intestine bacterial overgrowth (SIBO). IBS, being a syndrome, is a compilation of symptoms that involve abdominal pain and bowel habits. There is often inflammation in the small intestine and/or large intestine that causes difficulties with absorption of nutrients, bloating, gas and constipation or diarrhea.

SIBO is a cause of inflammation in the small intestines. Bacteria are important inhabitants of the large intestine but should mainly be living there and not higher up in the digestive system. When too many colonies are thriving in the wrong spot, SIBO develops along with symptoms of bloating, gas, and changes to stools. Sometimes even the development of food sensitivities can be in response to these overgrown colonies.

Treatments for IBS and SIBO are quite different. A person with newly diagnosed IBS may be told to avoid certain foods, to take a probiotic and essentially just live with the condition. SIBO can be treated and eliminated with a proper diagnosis based on testing and appropriate treatment.

The biggest relationship between IBS and SIBO is the fact that SIBO causes IBS in many cases. So, if everyone with IBS tested for and treated SIBO, there would be a lot less digestive dysfunction in the world!

In the large intestine (aka colon), trillions of microorganisms make up the microbiome. Colonies will inhibit or promote growth of other colonies and balance is achieved. This system helps humans with important functions such as activation of certain vitamins, metabolism of hormones like estrogen and a healthy immune state.

Sometimes, colonies can migrate and move upstream into the small intestine and set up new colonies. In a healthy gut, this is recognized and removed by our immune systems or the natural gastric and enzymatic juices kill off the invaders. If the bacteria are able to colonize, this is called an overgrowth. Bacteria use undigested and fermented foods to survive and in the process will release gasses as part of their metabolism. The main SIBO gasses are hydrogen, methane and hydrogen sulphide.

Gasses build up and cause bloating, gas, diarrhea, constipation, heartburn and other symptoms outside of digestion such as fatigue, headaches, skin conditions, joint pain, swelling and even poor immune function.

Each person experiences slight differences with symptoms. Most have the classic symptom of bloating, or feeling as though pants that fit in the morning are now too snug at the waist later on in the day.

Changes to stool frequency and consistency are also quite common whether it is loose and watery stool or hard, firm or pellet-filled bowel movements. Acid reflux and heartburn can occur because the gasses produced move upward and flatulence is from the downward movement of gas.

Rare, but absolutely possible, is when SIBO has no digestive symptoms. Headaches, anxiety, fatigue, hormonal changes, skin conditions such as acne, eczema or rashes and even the development of auto-immune diseases can stem from SIBO.

What is IBS (Irritable Bowel Syndrome)?

IBS is classically diagnosed based on specific symptoms and how often they occur. Abdominal pain that averages at least one day out of seven for at least 3 months is the first criteria that must be met. Next, at least 2 of the following must also be experienced: changes in stool consistency, pain with having a bowel movement and a change in frequency of bowel movements. There is no official stool or blood test and no imaging that is required to diagnose IBS as long as the criteria are met with regards to symptoms. The subtypes of IBS are given based on stool habits. IBS-D for diarrhea, IBS-C for constipation and IBS-M for a mixture of both diarrhea and constipation on the same day.

So, what really causes IBS? The diagnosis does not lead to what is behind the symptoms and this is where Naturopathic medicine excels. Inflammation in the digestive tract will lead to IBS, but what sets off the inflammation in the first place?

SIBO is one of the root causes of IBS. It has been estimated that 70-90% of all IBS cases are linked with SIBO. SIBO can be tested by a specialized breath test through private healthcare to analyze for hydrogen and methane excess. Once established, rogue colonies of the small intestine are treated and killed using a variety of herbs and pharmaceuticals. If SIBO is the main reason for IBS and treatment is successful, IBS can also be resolved.

Since both conditions affect the small intestine, symptoms are quite similar. Changes to stool consistency, bowel habits and pain which can be associated with bloating are common to both. The onset of symptoms can sometimes both be traced back to a food poisoning or other major insult to the gut. Both conditions can flare up in times of higher stress and may cause general fatigue.

Some differences may be observed such as the symptom of heartburn. This would not meet the diagnostic criteria for IBS but it is included with some SIBO cases. Another point is that IBS has no official test to diagnose, no numbers or values to evaluate but rather a symptom picture. SIBO can be tested by a 3 hour lactulose breath test where thresholds will convey a diagnosis when crossed over.

Almost all digestive symptoms can be involved with SIBO. Bloating, gas, constipation, diarrhea, heartburn, acid reflux, discomfort and reactivity to different foods are some of the digestive symptoms of SIBO. As mentioned, there can be others such as headaches, fatigue, weight changes, skin rashes or other conditions of the skin and even hair loss or development of auto-immune disease.

SIBO can be caused by several different factors or events. Food poisonings and traveler’s diarrhea can start the process due to the trauma indured by the gut lining. Many people will state that digestion never went back to normal after one of these events. Other causes might be low stomach acid production or multiple rounds of antibiotics.

Can People Diagnosed With IBS Really Have SIBO?

Yes! Exactly this statement. Because the root cause of IBS is much more than 50% of the time due to SIBO, the answer lies in identifying and treating SIBO. If methane-producing bacteria are more active in a flare, constipation can be the most common symptom. If hydrogen-producing bacteria are in a high reproductive state, diarrhea is predominant. All types of gas produced can create bloating, discomfort or pain as well as stool consistency variations – which meet the diagnostic criteria for IBS.

Most mainstream physicians are comfortable diagnosing IBS based on the criteria described. Gastroenterologists may confirm with additional testing, as it is important to rule out inflammatory bowel diseases such as Crohns or colitis. However a diagnosis of SIBO is less common. Naturopathic physicians can take additional courses to become SIBO-aware and order the specialized tests required for an official diagnosis. Regular courses and research helps NDs to use a wide variety of treatments to resolve SIBO with success.

Traditionally, IBS patients are often advised to change their dietary habits as a new lifestyle. Whether it is removing dairy or sticking to a low FODMAP diet, these changes can sometimes help to reduce symptoms, but not resolve the disorder. SIBO treatments revolve around using herbs and sometimes pharmaceuticals to eradicate the overgrown bacteria without involving dietary changes. If a person has to eat a special diet for the rest of their life to avoid serious flares, they are only managing symptoms. SIBO can be treated and diets are varied without restrictions to continue with a symptom-free life.

There are many common questions regarding the comparison of IBS and SIBO. Here are a few.

How do I know if I have IBS or SIBO?

The best way to know is to complete the SIBO breath test and have a professional interpretation of results. Remember, IBS is just a group of symptoms that are seen together involving digestion. IBS doesn’t explain why the symptoms are present, but SIBO does and it can be diagnosed and treated.

Can SIBO be mistaken for IBS?

Yes, quite often. If a SIBO breath test is not completed, a diagnosis can’t be officially given. Whenever possible, testing should be used to learn more about digestive health.