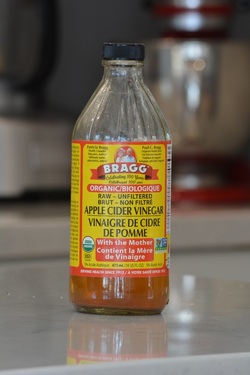 Everyday I find myself recommending the use of apple cider vinegar to promote good digestive health.  A patient of mine recently told me about how common and plantar warts were easily removed by apple cider vinegar within 1 week of applying daily.  I was very impressed and decided to test this out on a stubborn wart on one of my children.  This wart had been a true survivor after months of different applications and remedies but it had no chance against apple cider vinegar.  Nightly a cotton ball was soaked in vinegar then squeezed and fastened to the wart with some tape over night. A huge change took place over night and the battle was won by the 6th application. This inspired me to research some of the other uses of apple cider vinegar.


Commonly I prescribe 1-2 teaspoons of apple cider vinegar to be consumed right before a meal for digestive health.  This has a few functions.  The acidity acts as a stimulant to the brain and stomach to get the digestive process started and therefore improves secretion of digestive enzymes and the break down of food.  Apple cider vinegar also promotes the stomach lining to release more stomach acid which is very important to the digestive process and of noteworthy mention – B12 and protein absorption in the small intestine.  In turn, symptoms that are usually thought to be associated with high stomach acid levels (actually due to low acid levels) will begin to resolve within a week of consistent use.  As an added benefit, along with a balanced diet and exercise, apple cider vinegar could potentially help with weight loss as it promotes satiety, or the sensation of being full due to the acetic acid content.


Consider adding apple cider vinegar into your daily routine.  Choose a high quality source such as Bragg’s Organic Apple Cider Vinegar and consider one of the options mentioned HERE to help you get started.